Executive Chairman of the Board at Lightbridge Corporation 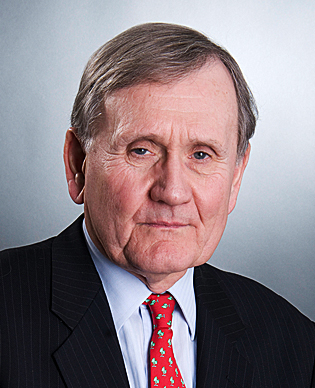 Thomas Graham Jr. is a leading authority in the field of international arms control and non-proliferation agreements designed to limit and counter the proliferation of nuclear, biological and chemical weapons. He currently serves as the Executive Chairman of the Board at Lightbridge Corporation and the Board Chairman of CanAlaska Uranium Ltd.
Graham has served as a senior US diplomat, as well as Acting Director of the US Arms Control and Disarmament Agency. Appointed by President Bill Clinton, he served as Special Representative of the President for Arms Control, Non-Proliferation, and Disarmament, leading US efforts to achieve permanent extension of the Treaty on the Non-Proliferation of Nuclear Weapons. Graham has been involved in the negotiation of every major arms control and non-proliferation agreement between 1970 and 1997, including negotiations on the Chemical Weapon Convention, the Biological Weapons Convention, the Strategic Arms Reduction Talks (START), the Strategic Arms Limitations Talks (SALT), the Comprehensive Test Ban Treaty (CTBT), the Intermediate Range Nuclear Forces (INF) Treaty, and the Anti-Ballistic Missile (ABM) Treaty. He has participated in nuclear talks with more than 100 countries, and has also been involved in Track 2 diplomacy on establishing a regional security framework in the Middle East.
He is the recipient of numerous awards, including the Trainor Award for Distinction in Diplomacy from Georgetown University (1995), the World Order Under Law Award from the American Bar Association (2006), and the Meritorious Honor Award from the Department of State. In addition to being widely published in scholarly journals and major newspapers, Graham has authored six books on the subject of nuclear non-proliferation. He has lectured at Stanford, Georgetown and, among others, the University of Virginia Law School on topics related to disarmament and nuclear security. He holds a BA from Princeton University and a JD from Harvard Law School.