Toward a Plan – Strengthening Canada’s Position in the Arctic

(A National Mini-Conference – The Government of the Northwest Territories, in partnership with the Institute for 21st Century Questions, marking the 10th anniversary of Global Brief Magazine)

“What are the Major Policy Dimensions of a Canadian Plan for the Arctic?”

“How Do We Move the Country for Long-Term Success in the Arctic?” 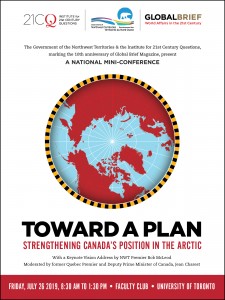